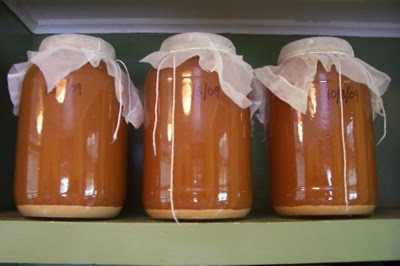 One of the great things about making your own sweet apple cider is that you can use some of it to make your own apple cider vinegar. It so happens that cider vinegar is very easy to make, as you’re about to see.

The picture above shows three one-gallon jars of homemade apple cider up on a shelf  in the back entryway of our house.The jars have been there a few days and you can see  that a layer of sediment has formed on the bottoms.

Here is a picture of a single one of those  jars right after filling it with cider. You can see that I have tied a piece of porous nylon curtain material over the top of the jar. You need some porosity so the naturally-occurring  airborne organisms that start fermentation can get in there. And the widemouth jar is also good for this purpose. It is better than, say, a one gallon glass jar with a small cap. 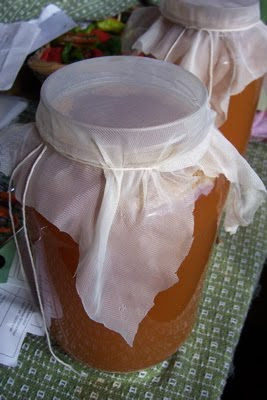 For this batch of cider vinegar, my wife, Marlene, added two tablespoons of vinegar from the previous year’s vinegar fermentation. But even without adding this “starter” the vinegar will make itself. We have made it several times without any starter. Introducing some live active culture just helps get the process going faster. 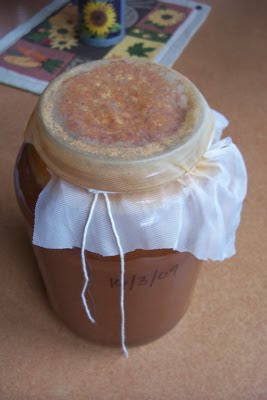 The picture above shows the vinegar a month after the previous pictures. Biological activity has caused the cider to froth up as evidenced by the dirtied cloth. Hmmm.... let's take a look underneath: 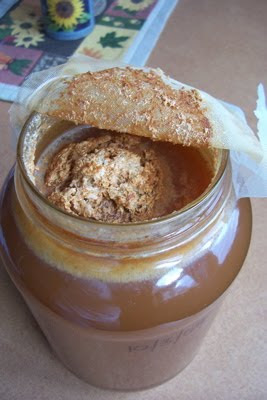 Oh! Wow! That's nasty looking! That pile of "crud" (that's the best word I have to describe it) you see in the picture is soft and dry and floating on the liquid. Around the perimeter of the floating crud mass is a clear, gelatinous formation, which I would say is the developing vinegar "mother." The jar smells like wine. 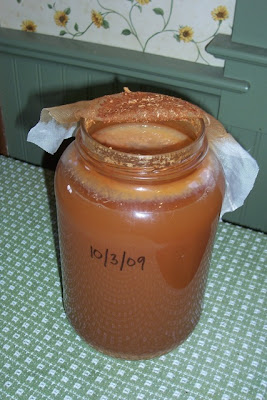 The above picture of our cider-vinegar-in-the-making (approximately two months old) shows that a gelatinous “mother “has formed very nicely on top of the cider. This is biological progress. There is a faint vinegar aroma to the jar, but the liquid has not clarified. Remember, I have done nothing to "make" the vinegar—just watch nature take its course. 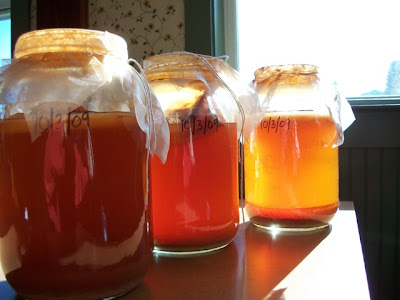 The picture above shows what the three jars looked like look after being up on the shelf for six months. I suspect the vinegar has been done for some time, but I wasn’t in any hurry to check it. Only when it became noticeable that the liquid was evaporating off did I think I better tend to getting it out and into sealed jars. Here is a look down into the jars: 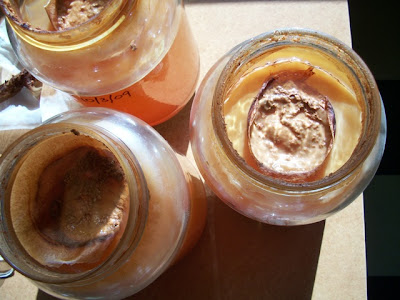 The material floating on the top of the vinegar was not very appealing to look at. I set the jars, one at a time, up on a couple plastic pails and used a short length of vinyl hose to siphon the vinegar into canning jars. Suck on the end to get the vinegar flowing (and get a taste of the bitter goodness). 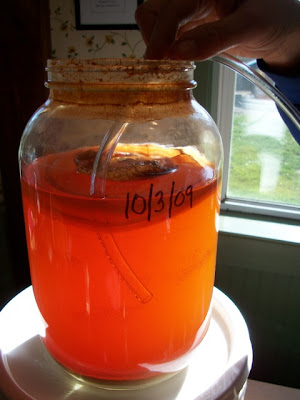 I filtered the vinegar through a coffee filter. But I don’t really think there was any need for this and will probably not do it again. It didn’t appear that the filter filtered anything out. 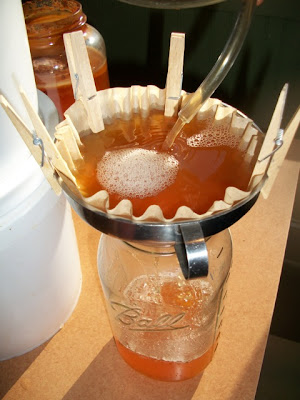 The bottom of the gallon jars had a fine, reddish sediment which we tried not to siphon up. The gelatinous layer that was on the top of the vinegar stayed together. It is best described as "slimy" and “placenta-like” 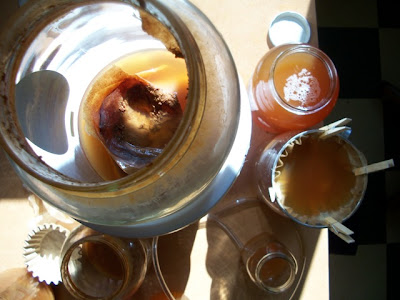 We ended up with almost two gallons of golden cider vinegar like this last picture shows. 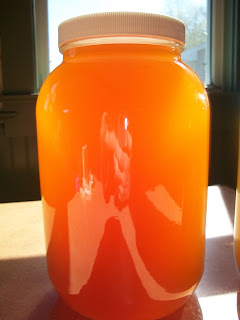 That is POTENT vinegar—a product far more virile and good-for-you than the grocery store stuff. Marlene will use it primarily to make oil&vinegar salad dressings, three-bean salads, and in chicken barbecue sauce. Sometimes Marlene will put a teaspoon of the vinegar in a glass of cold water and drink it. It’s supposed to be good for what ails you. (I've written in years past here of the amazing curative powers of "real" homemade cider vinegar. You can read about it here.)
Email ThisBlogThis!Share to TwitterShare to FacebookShare to Pinterest
Newer Post Older Post Home 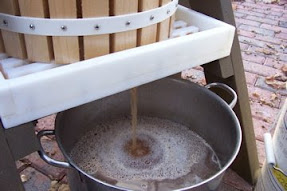 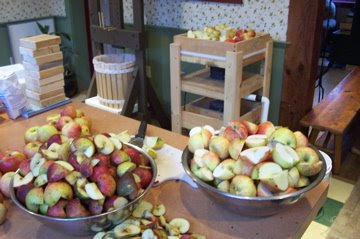 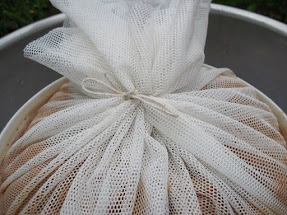 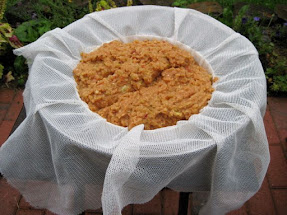 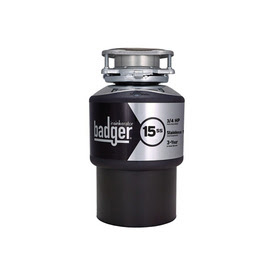 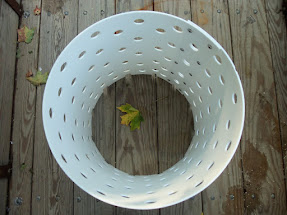 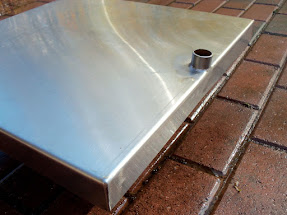 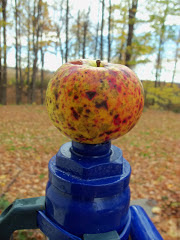 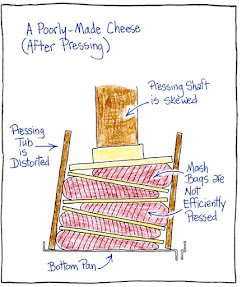 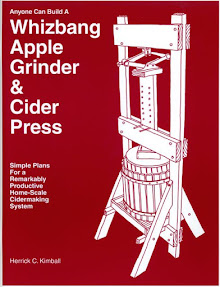 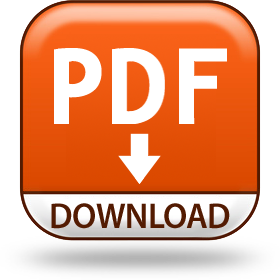 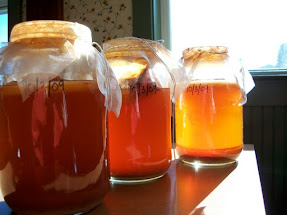 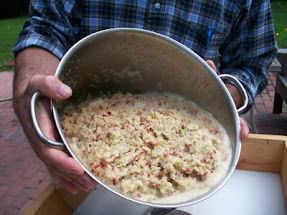 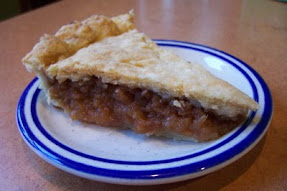 Read the conclusion of my adventure into making Whizbanged applesauce (click the applesauce pie slice)
"I have used your plans to build a chicken plucker and a cider press and an apple grinder. Last year was a great apple year here in central PA. I made 160 gallons of sweet cider and 20 gallons of hard cider. Good Stuff!"
Jeff Miller, PA
"Last year I bought your plans for the Whizbang apple grinder and cider press. I constructed them both easily and made over 50 gallons of delicious sweet cider!"